This is SO a thing. I can’t believe the cold weather is that we are having right now. My wipers just scraped ice across my windscreen this morning. This weather gives me absolutely no motivation to do anything. If someone could give me a doona and pillow and tuck me in on the couch with the heater pumping and feed me delicious food for the next two months I would be oh so content. Unfortunately this isn’t going to happen.

I think this feeling came on this morning due to the weather being just 3 degrees, it’s just insane. That, coupled with the fact we have just returned from a mini family vacay in the beautiful Hamilton Island. Where everyday was at least 15 degrees warmer than here. I’m not sure why we live in this Victorian climate, I can’t stand being cold. Yet here I am, only one month into winter and already I want out. I’m longing for another holiday already. Ugh.

I know I’ve been lucky and already had two this year. So I shouldn’t complain. But still, it’s now colder and I need another. I think the next holiday will have to be longer, much longer. The type where you completely skip winter perhaps? I like the sound of those ones. Where do I sign up for them? And who pays?!

The one (and the only one) reason which was a good to come home, was to be able to get Reevie off that plane and into his normal environment. Reeve, as any 22mth old can be, is very determined, demanding, doesn’t sit still for more than 30seconds at a time and he’s into EVERYTHING! He has absolutely no fear and loves ‘trying’ to keep up with his older cousins. He’s also hit those ‘terrible twos’ much earlier than two and much earlier than Hux did. Maybe it’s a second child thing? I don’t know. But wow he’s a busy boy. He kept us (and everyone else) on our toes the entire holiday. The one good thing, he does love a pram, so thankfully we had one of those to strap him into at times and take him for a walk when needed. We also hired a golf buggie (or “car” as he called it) one day and cruised around the island. Our “car” came complete with baby seats. The kids all loved them! Trying to keep them out of them (Reeve especially) was an activity all in itself!

We booked this family trip 8mths ago and we all couldn’t wait to escape the Melbourne winter, which we certainly did, but not quite the hot (full sunshine) weather we’d hoped for. But still, it was, by looking at the reports, at least double the temperature of here. So we’ve got to be happy with that. Apart from the much needed climate change, it was also a bit of an experiment, this is the first time the whole family has been away together (only missed by Seans youngest sister Silvi & her fiancé Blake). It was such a fun trip, a little exhausting with the 6 kids (4,3,2,2,1 & 8mths) but it was lots of fun. More beautiful memories created and captured. I’m sure the Hamilton Island staff and our fellow plane passengers were happy to see the back of us, we were certainly the most messy and noisey group you could have possibly had.

Grandma & Grandpa (Sean’s Mum & Dad) offered each couple time out to do something minus the kids, so Seany & I ran, walked, hiked and skidded our way up & down Passage Peak. The highest point on the island, which gives a 360degree view of its beautiful island surroundings. It’s a 4km round trip, with an elevation of 234m. It was beautiful, quite the intense workout but the views at the top made it totally worth it. Sean as he sat down to enjoy those views got the fright of his life when a snake casually appeared next to his foot. Thankfully it was a non venomous tree snake (we only discovered when googling him later) we however removed ourselves completely not too sure on our new little friend. Who happily slithered away after saying a quick hello and scaring us all.

This year we are going back to Bondi in August to again tackle the 14km City2Surf. So we’ve started taking any opportunity to try and do some training for this hilly course. We can’t wait. I definitely won’t be running the whole thing, but I’ll give it my best. I’ll also be doing some fundraising once again, as to what charity this year I’m unsure. I’ll update you soon.

Our 3 nights away on ‘Hammo’ flew by, lots of eating, swimming, exploring, paddle boarding, beach play and attempting to make the most of every ray of sunshine that came our way. Once again this trip has been a timely reminder for me on how lucky I am to still be here and enjoying the pleasures that life brings. Seeing the colour at every opportunity. Spending quality time with family and nothing beats seeing the pure joy and excitement on your children’s (and niece & nephews’) faces when they experience something new for the first time. This holiday sure had plenty of those!

P.S. For the record, the “experiment” went well, there has been talks of another family holiday already as to when and where who knows. But maybe 5yrs down the track 😜….

A few happy snaps of the holiday x 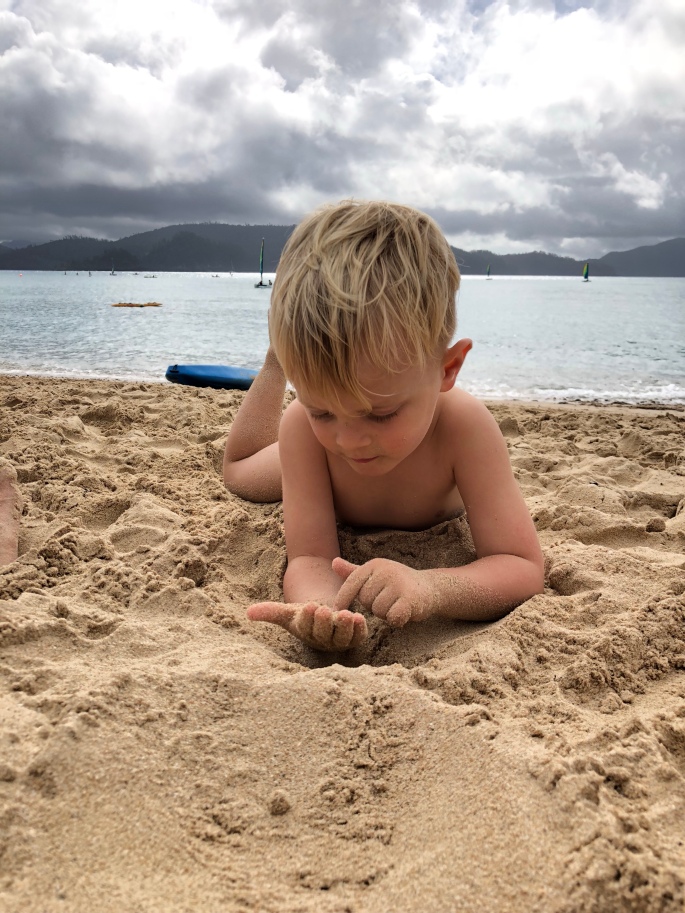 Safe to say grandma & grandpa had their hands full!

The hit of the holiday for the boys! The buggy 🚗