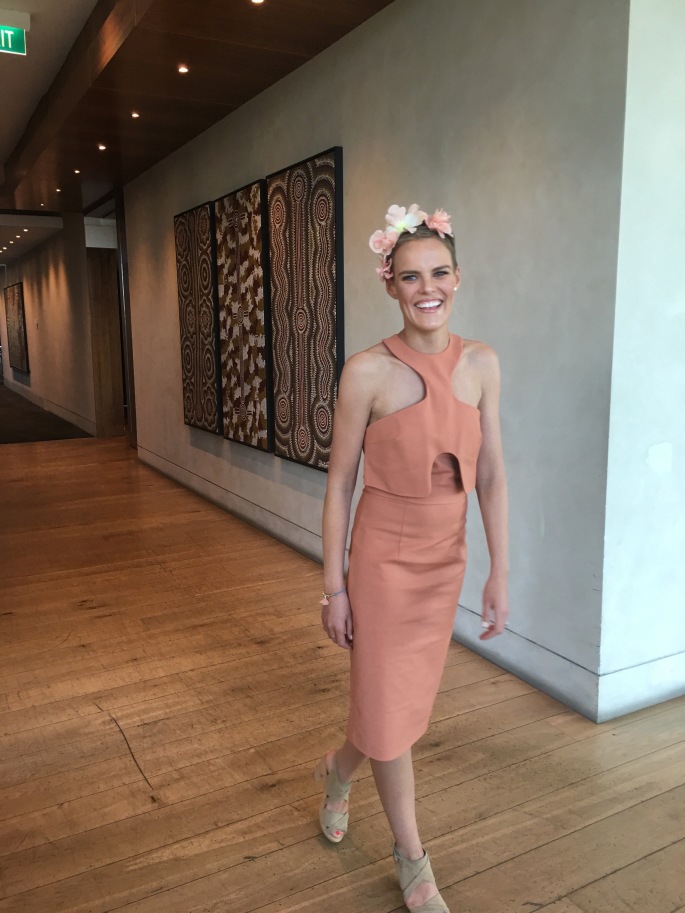 A few months ago via my a Facebook support page for Australians with brain tumours, I saw a Brain Cancer retreat advertised for women who are patients, carers or any women directly effected by this disease. I decided, hesitantly, I’d purchase a ticket and go along. The weekend is put on by the ‘Peace of Mind Foundation’. Which is an organisation ran by a women named Bec Picone, who lost her sister-in-law to Brain Cancer. She runs the weekend a minimal cost to the attendees by using generous donations from the public & local businesses.

So I set off on a little adventure from home on Friday morning, and made the journey to Torquay. Managing to stop in on my best girlfriend Gemma and her partner Matt’s restaurant – Captain Moonlite – for lunch, on the way in Angelsea. If you haven’t been here, do it. You don’t know what you’ve been missing out on. The best food and talk about dining with a view. It’s just stunning. 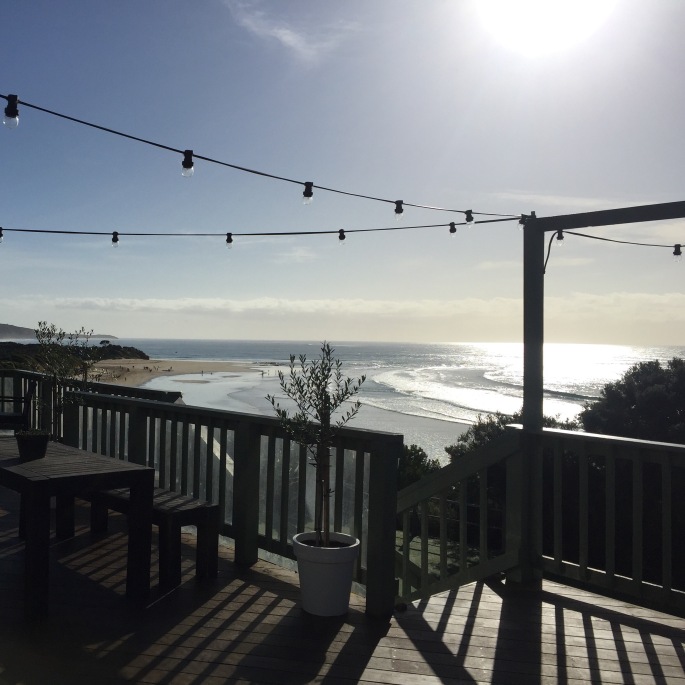 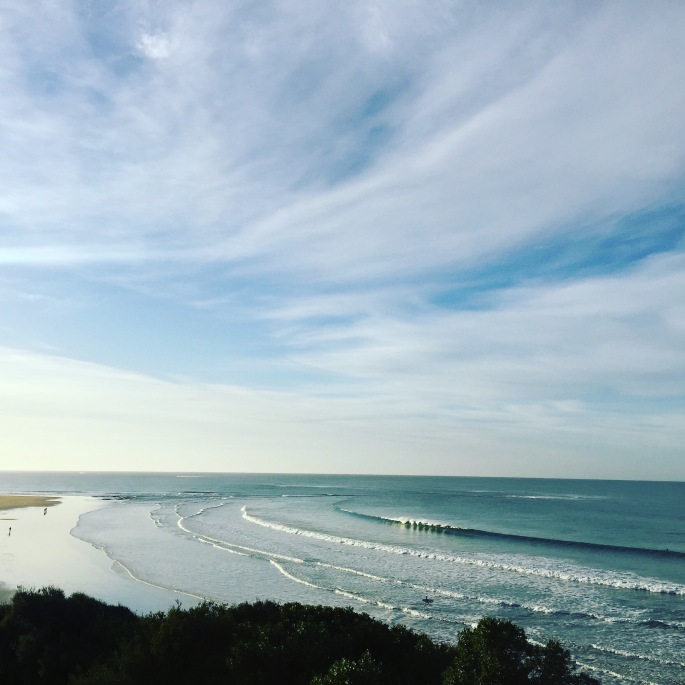 Captain Moonlite was recently included in Gourmet Travellers Top 100 Restaurants in Australia. They came in at an amazing No65. And No6 for Victoria in Regional Restaurants. Which is bloody amazing. They have only been open 18mths and are absolutely killing it. I’m so incredibly proud of them both. They’ve turned a little old Surf Club serving sub par deep fried food into a beautiful restaurant with an ever changing delicious seasonal menu. Do yourself a favour and pop in next time your down that way, but don’t forget to make a booking, they can get very busy! Want to know more? Check them out here.

After leaving my delicious lunch & great company and safety of Gem, I took the daunting steps to check myself into Peppers Sands. It’s so awkward travelling somewhere solo. In fact I think this is the first time in my life I’ve done something like this, ‘Nigel no friends’ right here haha. So it began…..”Hi I’m Donna”…

After an early BBQ dinner on the Torquay foreshore to begin the weekend and idle chit chat with the other guests we headed back to the hotel. I decided it was too early for bed and left the hotel to catch up with my cousin and his wife who live locally. It was funny though, I felt like a naughty school kid escaping from school camp. It didn’t quite feel right. After leaving them and “sneaking” back in, my room mate Bridie whom I’d only met that day too was in the room, she had also been out visiting family, we said our goodnights & settled in for a good night sleep in our little single beds side by side haha, both of us minus our kids. I’d been paired with Bridie as we’re both from the Mornington Peninsula and similar in age. So it was nice.

Saturday we had a range of activities. Including masterclasses on essential oils, a naturopath regarding health and diet and to top it off a cheese & wine tasting from one of Dan Murphy’s wine gurus. Got to say, he was probably my fave 😉!

Free time was my next item on the agenda so I went and caught up with one of Seans best mates Tim and his girlfriend Phoebe and took a stroll along Jan Juc beach enjoying the beautiful sunshine.

Following was a huuuge delicious gourmet platter style lunch in Torquay at The Workers Hut. We all sat in the sun enjoying a glass of wine, swapping stories of “what tumour do you have?, how did you find out?, what treatment are you on? Did you have surgery, radiation, chemo? Any medications?” and so on and so forth. It was all rather bizarre really, talking about yourself like this. People however were very kind and always mentioned you don’t have to talk about it if you don’t want too. But of course I was happy too, that being the main reason I was there.

Quite a few people I met had a similar tumour to me, some worse, some better (to clarify none are better really, there’s just so many degrees of bad). Some were women whose husbands had the tumour. But there was one certain thing we ALL had it common. It was shit. Unfair. And no one wanted to be in this situation. But hey we are, and we all now share a bond because of this. 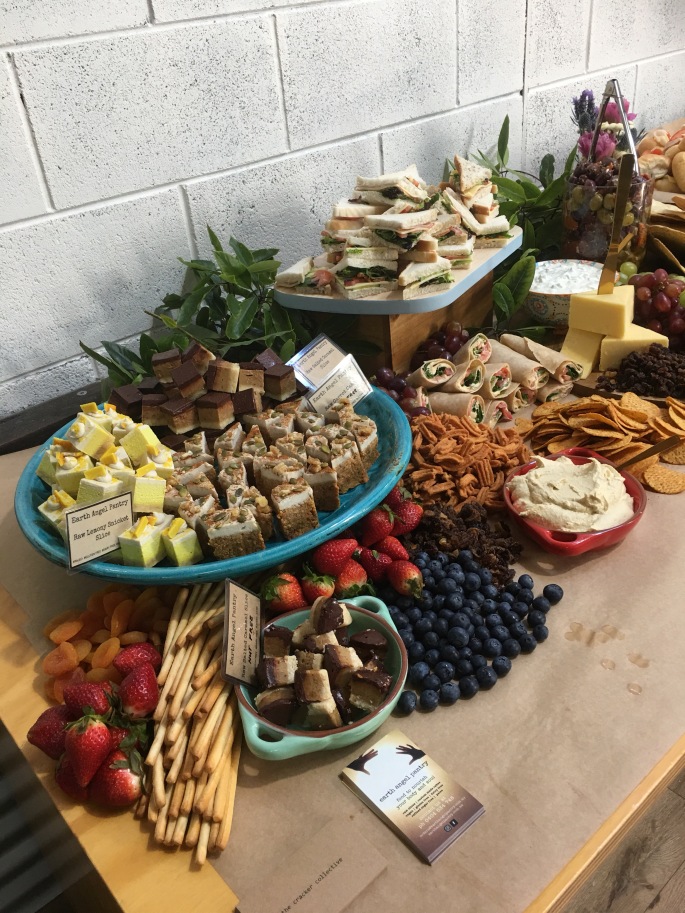 After lunch we were treated to beautiful pampering sessions where we had the options of facials, massages, spray tans, nails, reflexology, makeup, hair & more. Safe to say I didn’t have my hair done as let’s face it there isn’t much to do haha. And I decided against taking Gwen, I just wanted to me the real me. And what better time to do it. I was surprised though, I thought there would be a few with short hair. But no, seems I was the minority. Most others there I spoke with seemed to haven’t had radiation yet or had it awhile ago so their hair had grown back.

All the women whom were doing the pampering had ever so kindly donated their time and supplies to do so. My makeup artist was the gorgeous Dale. She was so lovely and so nice to speak with and above all else she did a wonderful job. Thank you Dale for volunteering your time and making me feel so good. You’re amazing and it was so good to meet you. 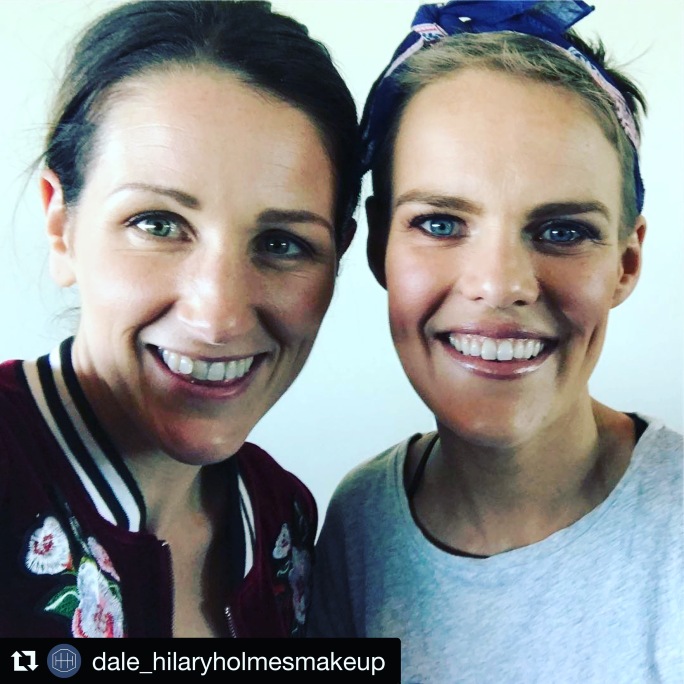 Once we got all dolled up we headed back down for the main event, a few drinks & cocktail food followed by two very special guest speakers – Kellie Cartwright & Moria Kelly. You may recognise those names or maybe not. If not, Kellie is the amazingly beautiful & talented Paralympian who competed in London 2012 and won both a gold & silver. After loosing her leg at a young age to a rare form of cancer.

Moria is the amazing humanitarian who is most known for her involvement in bringing Indian siamese twins Krishna & Trishna to Australia for the world first surgery of their type to successfully separate them. Little Trishy even accompanied Moria for the night, she was a beautiful little girl and I was so honoured to meet them all.

A few quotes I took from the night from both of these amazing women.

‘Look for something positive everyday, even if some days you need to look a little harder’ – Kellie

‘One of the hardest decisions you’ll ever face in life, is choosing wether to walk away or try a little harder’ – Moria

Both of these really resonated with me. 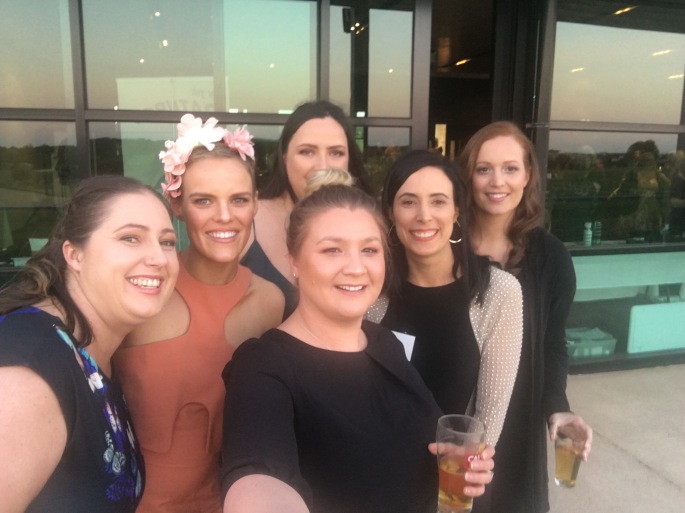 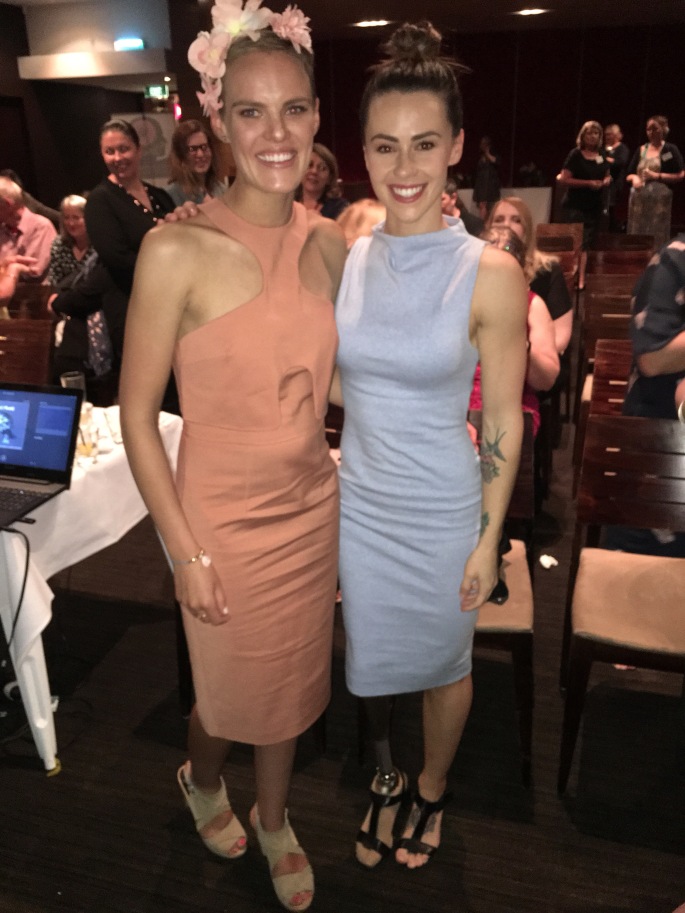 The following day, we were told we had a surprise in store. We knew we were off to Bells Beach, Aireys Inlet Lighthouse & finishing up at the Great Ocean Road Chocolaterie for lunch. Upon checking out I noticed heaps of old muscle cars in the car parking lot. Ignoring them, thinking they were just there on a Sunday drive. Then we were told no they were our transportation for the day and to choose any car we liked to ride in. So my roommate Bridie and I chose ourself a fancy red American Plymouth from 1959! It was one fancy car and only the 2nd one in Australia. I chose this car to match my headwear of the day (thanks Courts!). It was such a beautiful day cruising about in her. Tourist shots 👇🏼☺️! 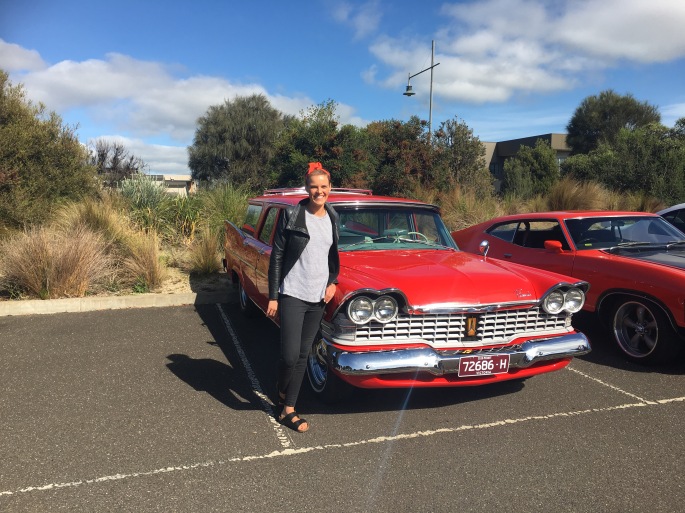 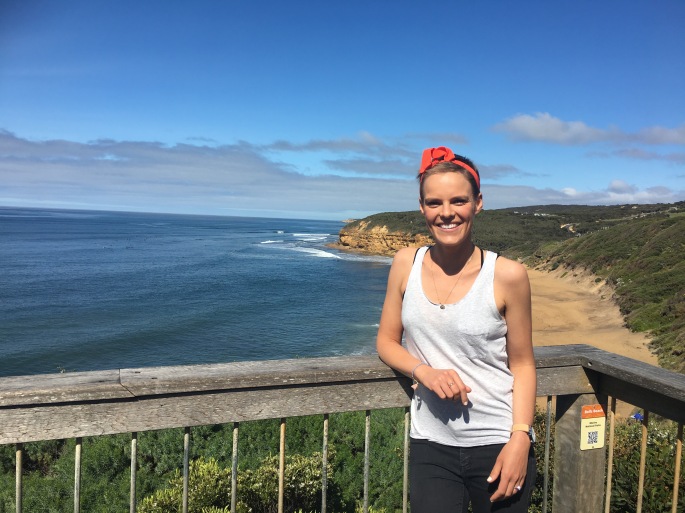 Now thinking back about my weekend had, it was such a wonderful weekend meeting beautiful women I would have never otherwise had the chance to meet. And I’ll definitely be signing up again next year given the opportunity. Thank you to all of those who I met and sharing your stories with me. Hope to see you all again one day soon. Keep fighting this fight, you’re all amazing. Together we will beat this.

Oh and over the weekend I also finished my 6th chemo round. Woo hoo to half way!!!! 6mths to go!

P.S. In news just in, Captain Moonlite last night was just awarded their very first hat at the Good Food Awards in Sydney!! Huge achievement for them both. Well done Gem & Matt!