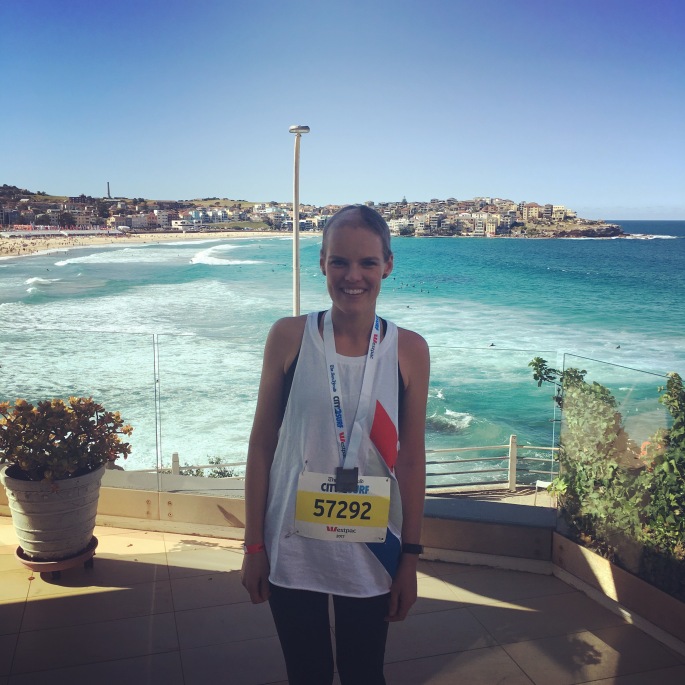 At the gym yesterday. Mid-chemo treatment (cycle 4/12). Just as I managed to complete 14km on the cross trainer  – so bloody proud, but sweating like I’ve never sweated before – the title of this blog came to me. And it really resonated with me. To often people are handed something, cancer/serious illness diagnosis and think, oh well, I can’t do that anymore. Which at times, to be honest, I have thought too. But as I was pushing out my last few kms, I thought, how crazy that actually is.

Don’t ever let yourself be dictated by your diagnosis and think you can’t achieve something that you’d like to do because you’re unwell. Same goes with anything and anyone in life, not just if you are unwell. I have a few case in points below.

In the past week I’ve managed City2Surf (14km), cycle class at the gym, 14km cross trainer as mentioned & a body attack class and to be honest I am feeling pretty good about it. And half of that is while I’ve been undertaking chemo. It’s all about a positive mind.

In speaking of City2Surf, last weekend as you know, Sean & Silv were running it in Sydney and last minute I was going too. I was feeling pretty down and when Ryan offered for me to fly up and then do the fun run too, I first was a bit hesitant due to my “diagnosis” but then thought, stuff it. I’m not letting this get in my way. And do you know what? It was so much fun, I had absolute ball and even managed to run the last km to the finish line at the beautiful Bondi Beach. With Ryan running behind filming me haha – thanks Stansy – the amount of comments I’ve had from people thinking I had ran the whole thing….*spoiler alert* sorry I didn’t. But really, I was looking a tad too fresh to have ran the whole thing wasn’t I? Video below….I definitely would have more likely collapsed over the line not smiled & laughed!

When we finished I couldn’t believe I’d just walked 14kms and it was actually easy. I was working it up in my head a bit prior to the race, that it would be hard and surprisingly, it was far from it. Old ‘Heartbreak Hill’ was steep, but wow what a view! It was a great feeling to know I could do it and it definitely won’t be the last. Next time, I’m aiming to run at least half. Which is handy as the next one is on the radar – City2Sea – is on 12th November in Melbourne so we’re all doing it again along with lots of extra Melbourne additions.

You’re only limited in what you can do by your own mind, a lot of the time it’s not others stopping you, it’s yourself you’re fighting against. To quote myself “don’t be dictated by your diagnosis”. If you want to do something, just do it (haha I’ve just unintentionally quoted Nike – yet they are, so right).

I’m contemplating getting t-shirts/singlets made for it with #lotusfordonna or #donnassupportsquad on the back for all our family and friends who partake in City2Sea and once again raise some more money for Brain Cancer. If anyone knows of anyone that does this (t-shirt design/printing), hit me up!!

In good news, we managed to raise $3,149.30 for the Cure Brain Cancer Foundation. The link is still open to if you wish to still donate (available up to 31.8). Click here. Or save your pennies for our next run in November 😉.
I greatly appreciate your support, a big THANK YOU to everyone whom donated.

My other thing I wanted to share about is my upcoming holiday….I’ve been given the all clear from my surgeon. Thailand here I come!! Thank god. The one thing however I can’t get, like anyone with cancer, is, travel insurance. I never knew this, but no one will cover the cancer, at all. I think there’s a few exceptions for years down the track, but not midst treatment.
But again, you can’t sit at home dwelling on your diagnosis and worrying something “might” happen and not enjoy life. We only get one. So live it. Who knows what’s around that corner.
That doesn’t just go for me and others out there fighting these bullshit diseases. I’m looking at you too…..”healthy ones”. As I thought, I was one of you too.

I’m personally feeling extremely well so I’m not letting that minor detail of, no coverage on ‘Terry’ stop me. Hello beach, sunshine, good company & lots of laughs in T-minus 12 days!!!

From the above, I assume you may have also realised I had my appointment this week, it went well. Well, not “well” but it wasn’t bad either. Basically, they are unsure what that “flair” meant but she said the way I’m feeling is just as much of an indication of how it’s going. So that’s a positive. I was so relieved to hear it’s not surgery now (not out of the question however) and I can go on my holiday and celebrate my beautiful boys birthdays!

Next MRI is November and we will decide a path from there. Until then I keep going. I started chemo again this week after meeting with my surgeon. I’m pleased to say I’m feeling well. I’m so very lucky there. So many others don’t fare so well.

A few photos below to share with you from the weekend in Sydney. 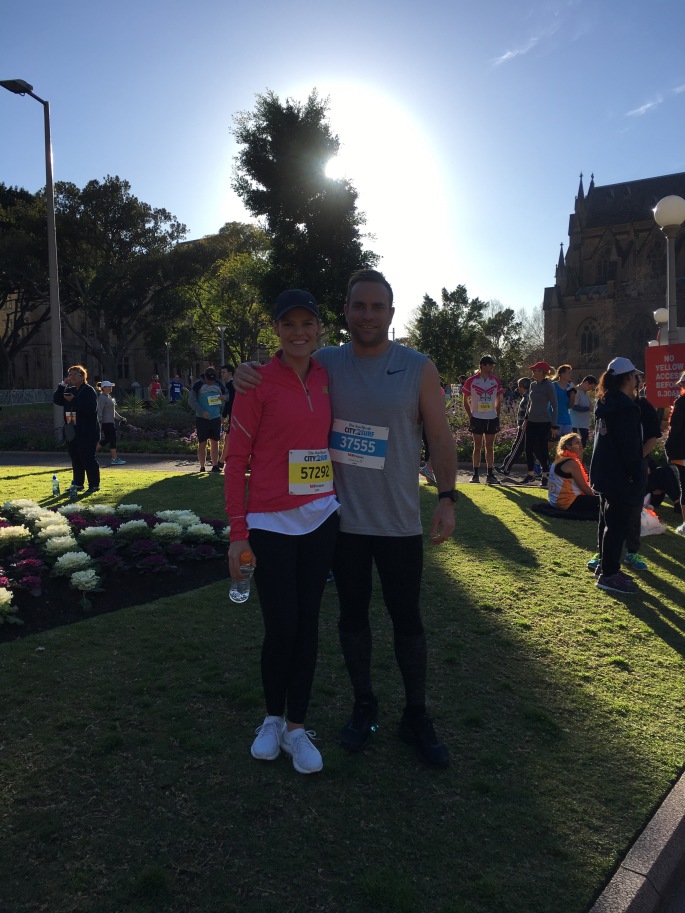 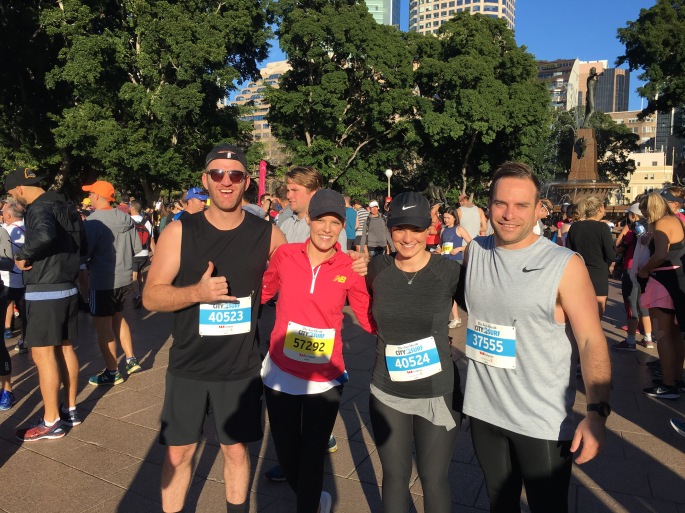 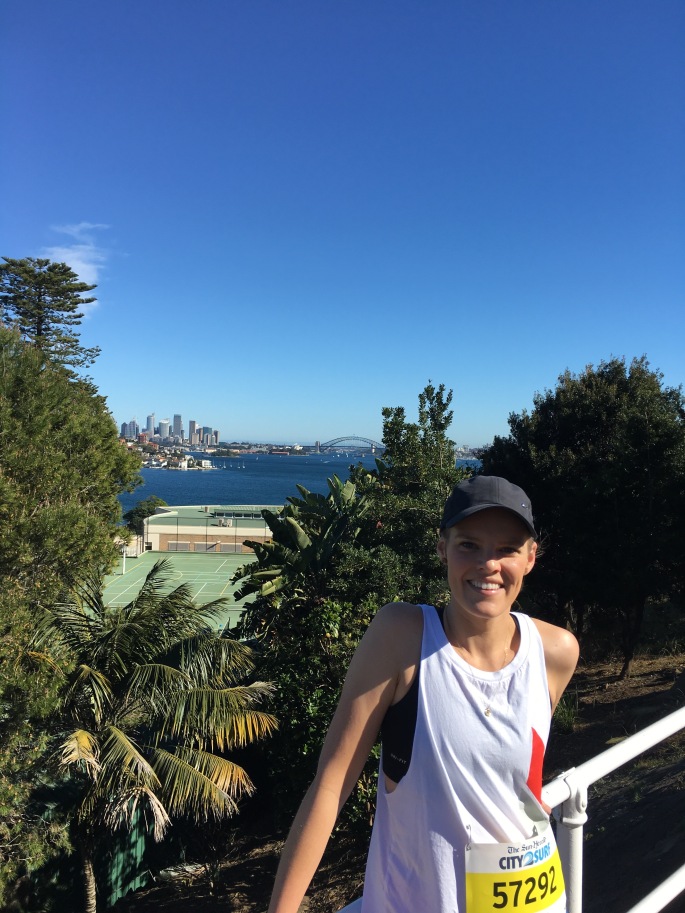 A mention also must go to my husband Seany and sister Silv on their incredible efforts in City2Surf. Seans first ever run and he beat his goal, finishing at 01:18 & Silv smashing hers too at 01:31!!! Well done, so proud of you both x